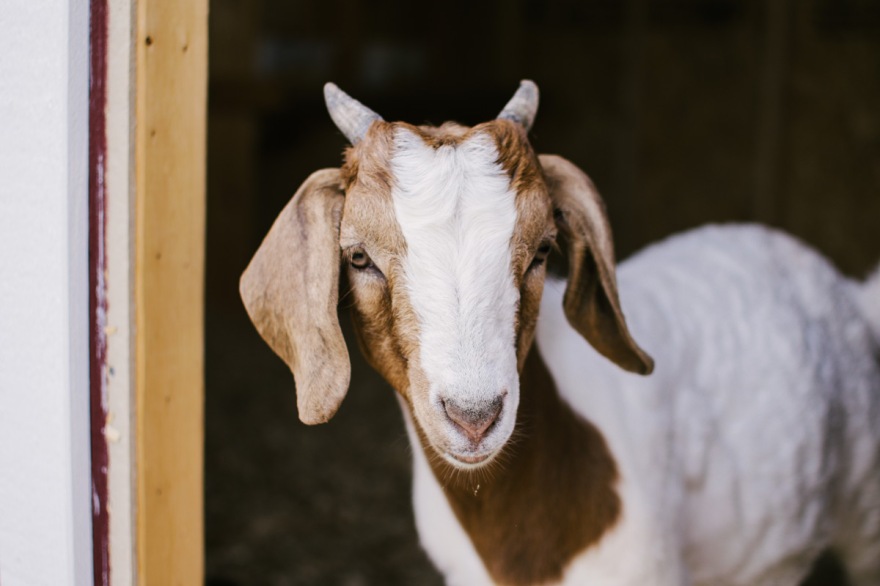 Animal advocacy is a cause near and dear to my heart, so I had a blast photographing all the beautiful, animal residents of Lancaster Farm Sanctuary on a warm and sunny May afternoon! All the animals I met were happy, lively, and so lovable with big personalities of their own. The Sanctuary, now officially a 501c3 non-profit, provides a safe and loving home for sick, injured, and abandoned animals. Founded in July 2017, they have saved and become the home to goats, ducks, chickens, a turkey, cows, and sheep during just their first year.

Meet the animal residents of Lancaster Farm Sanctuary below:

This sweet little Pygmy goat is Benjamin, or Benji for short. He was found abandoned at just 2 days old, but is now recovering from illness. He is very lively and happy. He followed me around during the entire photoshoot and mingled lovingly with all the other residents of the Sanctuary!

Livingston, or Livvie as he is affectionately known as by Lancaster Farm Sanctuary, is a lovely black and white Pygmy goat. He loves his fellow goats at the Sanctuary and shares a pen with Tammy the Turkey and Mary Margaret the Plymouth Rock chicken. It’s great to see multiple species living peacefully together! Livingston was originally purchased at a market to be kept as a pet, but the purchaser quickly realized that their dogs did not appreciate his presence. Fearing their dogs would harm or kill him, Livvie was given to Lancaster Farm Sanctuary to live a peaceful, happy life.

This handsome goat is Stanley. He is a Boer goat, which is a breed commonly raised for meat. Stanley came to Lancaster Farm Sanctuary with some mobility challenges, but that hasn’t stopped him from living life to the fullest! In fact, his mobility challenges are what saved him from the goat meat farm where he previously lived. He is happy and so sweet, and he enjoys the company of a Pygmy goat, a turkey, and a Plymouth Rock chicken (with many other animal friends nearby and throughout the sanctuary).

There are many feathered friends at Lancaster Farm Sanctuary as well! Meet Charlie (black and white), Tony (black and white), and Frankie (white)! All three of these rescued Muscovy ducks were given to their original owners as Easter gifts as chicks. Luckily, the Sanctuary gave them a safe home after their owners could not care for them.

Mary Margaret is one spunky bird, but don’t let her clucking fool you! She’s a very sweet girl (even if her noises sound like mischievous laughter). Either way, she no doubt has one of the biggest personalities at Lancaster Farm Sanctuary! Mary was found mysteriously wandering the streets of Lancaster City. Two local animal advocates rescued her and brought her to the Sanctuary. Upon arrival she was affectionately named after a dear friend of Lancaster Farm Sanctuary.

Tammy most likely ran away backyard butcher raising her for their Thanksgiving dinner. She was found in upstate Pennsylvania and made her way to Lancaster Farm Sanctuary through the kindness of some animal advocates. Tammy seems to have a special way of connecting and becoming in tune with the other animals around her at the Sanctuary. She also has a very special bond with Sarah, one of the co-founders of Lancaster Farm Sanctuary. She enjoys following Sarah around and even snuggling up to her leg while Sarah is using power tools! Tammy is a very special turkey!

Meet Bessie (brown) and her mother TrueHeart (beige)! They live at Lancaster Farm Sanctuary. They are both Jersey cows that were acquired by their previous owners for milking, but after they had a change of heart about using them as dairy cows, they came to live at the Sanctuary. Bessie and TrueHeart are nearly inseparable and so happy to be living together at Lancaster Farm Sanctuary!

Bandit and her fellow chicken friends were the very first residents of Lancaster Farm Sanctuary! These tough birds are survivors of a livestock tractor trailer incident. The driver of the truck lost control and spilled several creates. Sadly, hundreds of chickens were killed and many others were injured, including some of these chickens. Bandit (first photo) was ill when I met her which explains her droopy comb, but was still sweetheart and in a good mood. Thankfully, these chickens are safe from slaughter and can live a natural, happy life now that they live at the Sanctuary!

Eddie and Patsy were delivered as chicks to Lancaster Farm Sanctuary by egg farmers due to Eddie’s leg injuries. Patsy is Eddie’s faithful protector. The Sanctuary gave Eddie physical therapy treatment and attempted use leg braces. Eddie’s still has difficulties with her leg and foot which is turned upwards, but she is able to walk on it and is otherwise happy and healthy. Eddie and Patsy live next to Bandit and the other white chickens with whom they like to communicate with through the wire fence (as seen in the photos)!

Meet Abby (adult, black and white), Patrick (white lamb), and Gertrude (black lamb). They are a happy sheep family at Lancaster Farm Sanctuary. Momma sheep Abby was rescued by the Large Animal Protection Society (LAPS) from a neglectful, homesteading situation during her pregnancy. She then gave birth to Patrick and Gertrude (otherwise known as Gertie) on St. Patrick’s Day! Patrick in particular really seemed to love the camera and always has a smile.

Ready for your own photo session?

Book Your Session
Ask a Question